AT SWANK: CELESTINAS WEDDINGS, YOU GOT THE LOOK BY DARLA, GLITTER POSES

Today, I have another wonderful creation by Celestinas Weddings, the Angel Nuriel Gown White and Gold. It comes in fittings for Maitreya, all the Belleza bodies, all the Slink bodies, one fitted mesh, and five standard sizes. It comes with an ear cuff, two rings, both fitted for Bento and classic hands, a head band, shoes for Maitreya, Belleza, and Slink, plus three styles of wings with resizer menus. This is a very complete package!

Celetinas Weddings also is offering the fantastic Courtyard of Heaven Set 2017, which includes a reception area, a gazebo, event tables and chairs with food and drinks menu, planters, trees, flowers, fountain, statuettes, stars, clouds, champagne, wrought iron fence, and hedges borders. All this comes in a rezzer box. In addition, it has a resizer menu. This is a very large setup that you can mix and match and use in many various ways.

Here is a general view of the Courtyard of Heaven Set 2017. I am using Glitter Poses GP Sunlight 7. 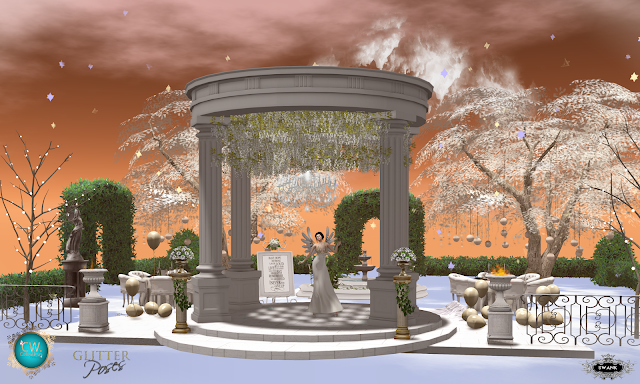 A closer look at the gazebo. 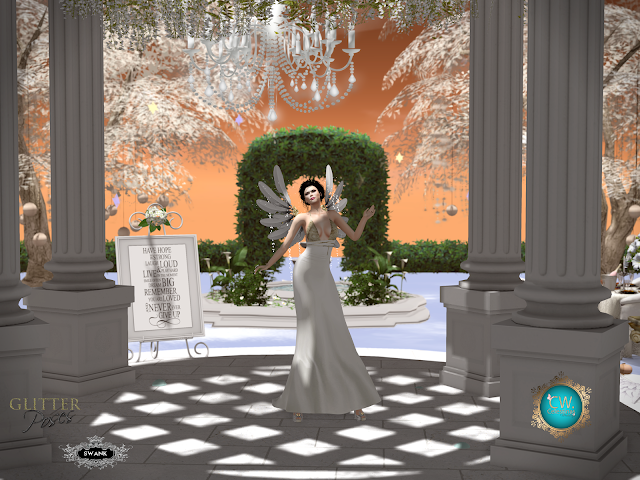 Here, you can see one of the lovely table placements and one of the statuettes in the Courtyard of Heaven Set 2017. This pose is Glitter Poses GP Sunlight 10. 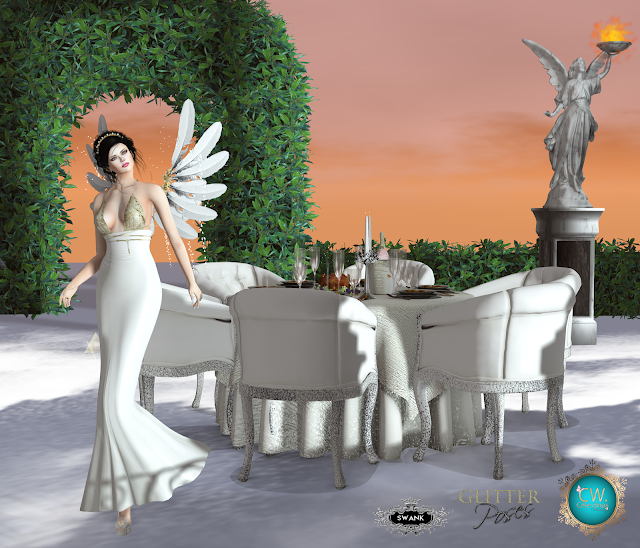 This is a different view showing a different table setting and statuette, as well as some of the lovely trees and the hedge borders, plus the fountain that comes with the Courtyard of Heaven Set 2017. The pose is, again, from Glitter Pose's wonderful Sunlight set, this time, the GP Sunlight 9. 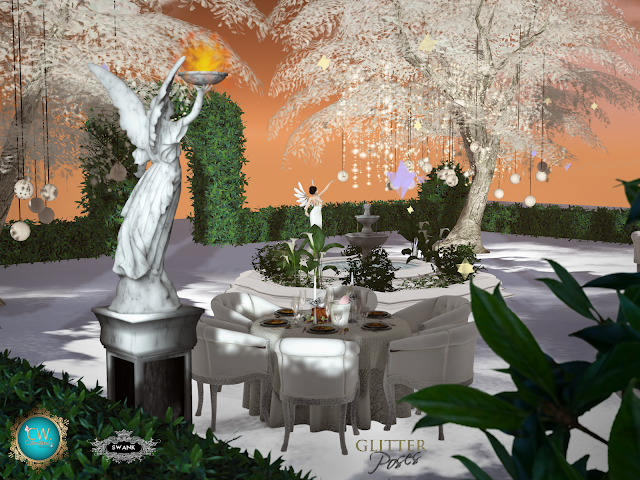 Here is a close look at the very highly detailed Angel Nuriel Ring Bento Hand that comes with the Angel Nuriel Gown White and Gold set. I also am wearing You Got the Look by Darla's Angelica Nail Polish for Slink. It also comes with appliers for Belleza and Maitreya hands. I am using the Slink Dynamic Bento Hands here. 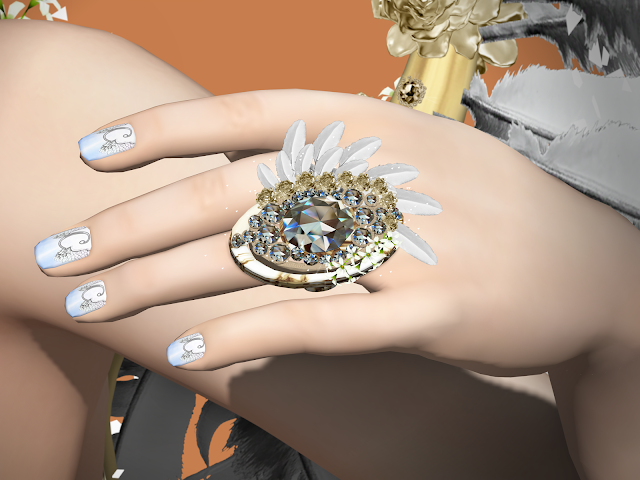 And, of course, you need to see the lovely Nuriel Angel High Heels shoes that come with the Nuriel outfit. 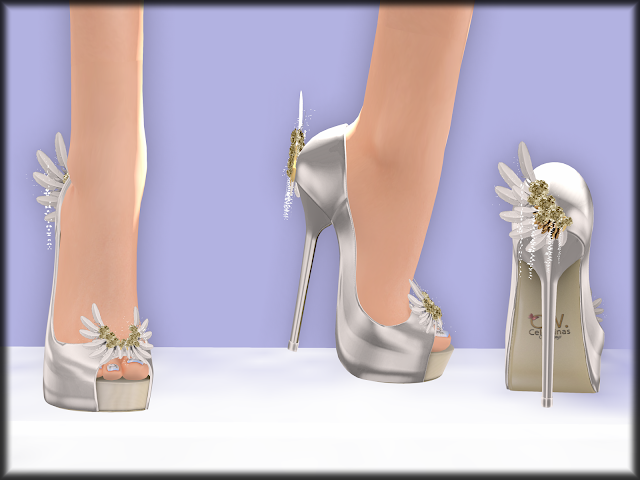 Swank's City of Angels will be open until the end of the month, but hurry over today to get these lovely, exclusive items from these top designers.

Swank's City of Angels is still going strong, so take advantage of the special, exclusive offers before they are gone on the 30th!

Today, I present Ghostyss' Renata White lingerie. This comes with Omega applier. The top is quite sheer, tapering to a more opaque bottom piece.

I also have Ch's Liz heels for Maitreya, Belleza, and Slink. These come with a color-change HUD that has 30 different colors in it.

Lyrical B!zarre Templates has given us a mixed bag this month. You get a wonderful set of gem-change wings in both silver and gold metal, plus five different gems to choose from.

Virtual Diva has created yet another set of fantastic poses this month. The Glowing Angel set has ten poses, from flying to sitting, and is a quite complete set. Here, you can see me using the VD Glowing 1 pose. Here is a closer look at Ch's beautiful heels. 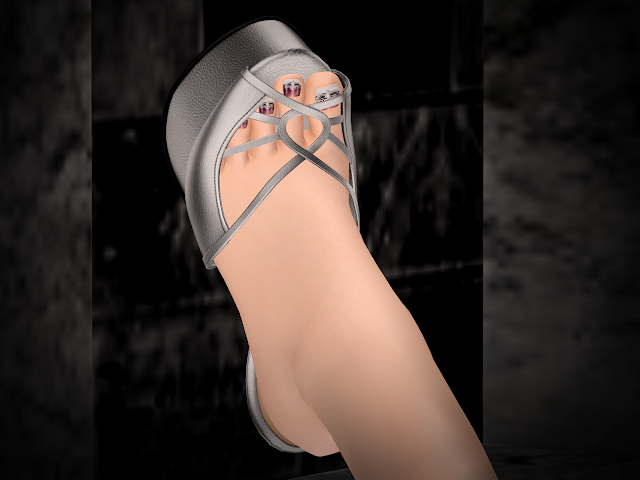 IP Nails has created the Angel set of nails this time. These are compatible with Slink Classic nails as well as the new Slink Dynamic Bento hands, which I am wearing today. There also are appliers for Omega, Maitreya, and Vista Bento hands. Here are the Angel nails in more detail, plus all the colors in the appliers. 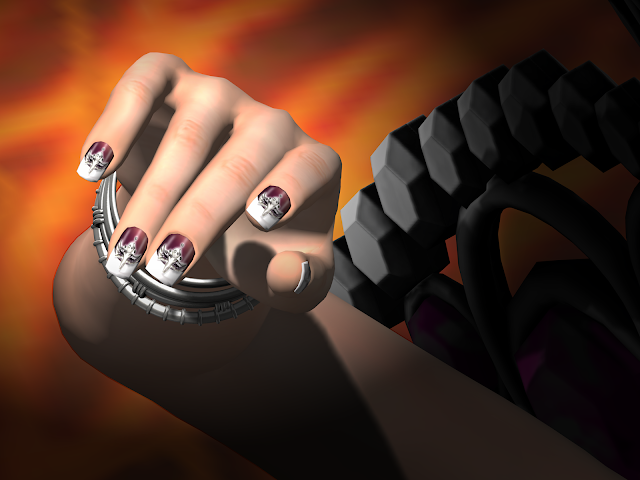 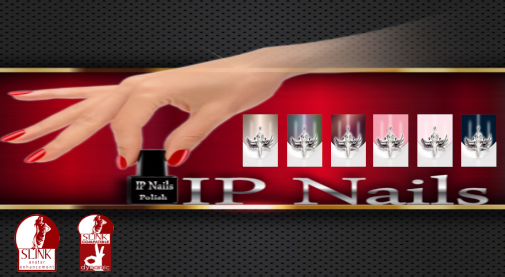 Returning to Lyrical B!zarre Templates, there is a set of full-perm walls available, which, as a photographer and model, I truly appreciate. You can see one of the backdrops in my full body shot above.

Here is the ride to Swank.

Posted by Dakota Lavarock at 3:20 PM No comments:

Swank round, City of Angels is on!

Today, Angel dress in Maitreya fit by Isa D'orable. The dress also is available in all the Belleza and Slink bodies, as well as standard sizes. I am wearing the Slink boots, but the boots also come in Maitreya, Belleza, and fitmesh. The wings also are included with the outfit.

This pose is from Glitter Poses Sunshine collection, GP Sunlight 7. 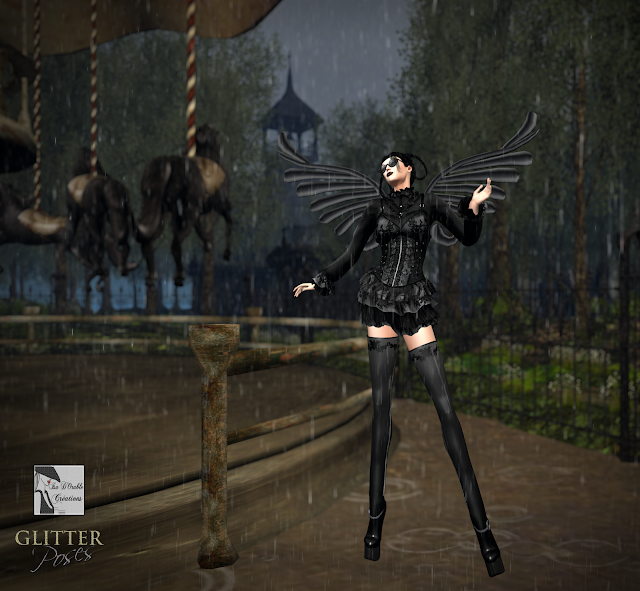 I wear my stylish Belier Enon Shades at night, oh yes! In the rain, even! They come with a texture-change HUD with eight frame colors, six lens colors, and three metal choices. Here is a look at that HUD: 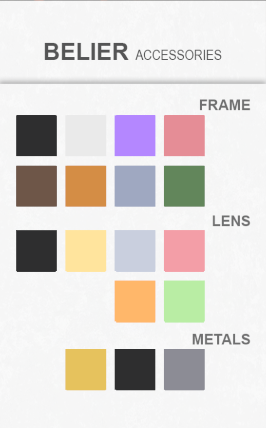 Here is a closer look at the shades and some greater detail on the intricate ruffles on the dress, and some extra wing detail. 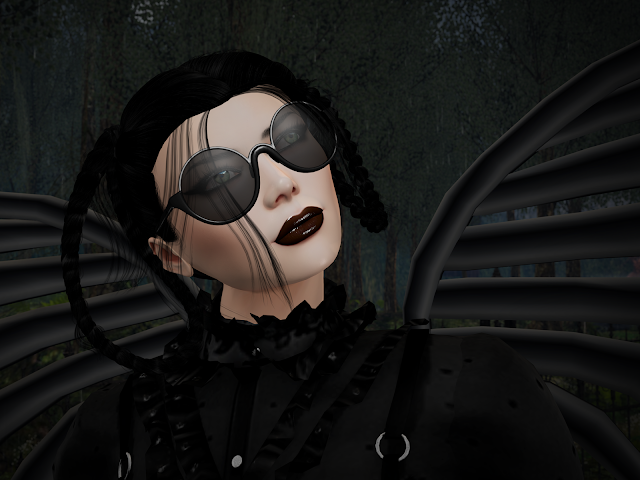 Dulce Secrets has offered up this beautiful set of On Fleek makeups, which include the lipstick, which is a perfect fit for this Angel dress. I have Advanced Lighting Model enabled, which gives a beautiful gloss to the lipstick, which, without the Advanced Lighting, is a more matte texture. I have used the Lelutka applier for my wonderful new Cate head, but the makeups also come with Omega and Catwa appliers, as well as Classic style. 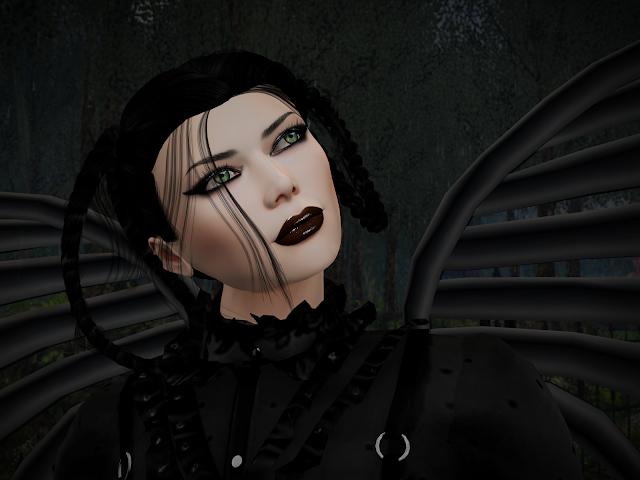 Here are the different eyeshadows colors:

Swank will be in full swing until the end of the month, but don't delay in going to take advantage of the many exclusive items waiting for you.

MY ADVENTURES WITH LELUTKA CATE--THE GOOD, THE BAD, AND THE UGLY

I have been very busy as of late, but I finally am getting to the point of returning with some blogs.

One of the new things in my Second Life is my new Lelutka Cate Bento head, which I picked up at the recent Skin Fair and which is now available in the Lelutka store. I had waited with great anticipation for the new Bento releases, hoping I would be able to find something I liked that could be modified to resemble my current system look as much as possible, and that system look was achieved with many hours of work to resemble my basic first life facial features. 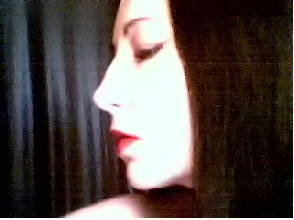 Here is the system look I had before the new Lelutka Cate Bento head: 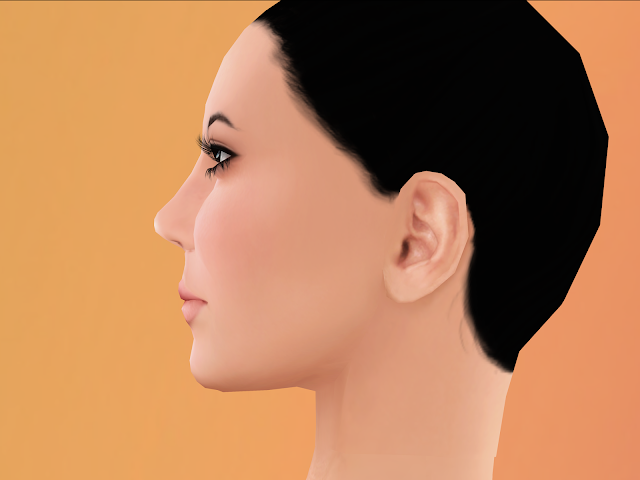 With the sliders for the system shape, there were a number of limitations in what could be done, and the stretching could only go so far.

Here is the same side view with adjustments made to the new Lelutka Cate Bento head: 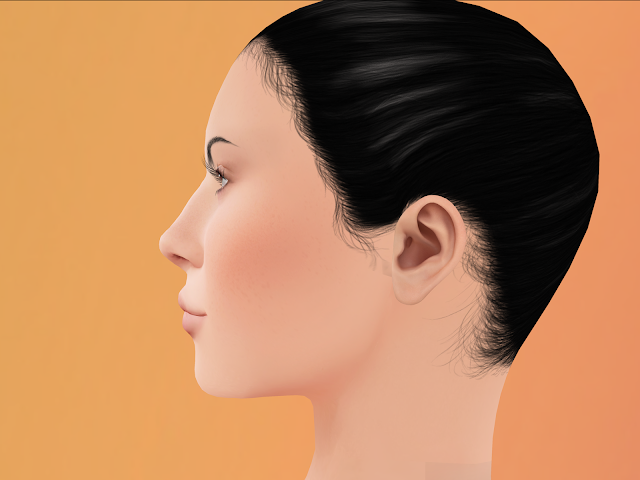 The sliders gave me a greater freedom to achieve the look I desired, allowing me to make more finely-tuned adjustments than the system sliders ever could. You can especially see this in the features of the nose, for example. I am part Native American, and I have a characteristic bump on my nose that reflects this. I have considered having it removed, but, then, it is part of my unique heritage, and to remove it almost feels like removing part of me. With my new Cate, I could recreate that bump much more accurately than with the system shape. I could have made the bump more pronounced, but opted for a lesser one.

I was quite happy with what I could achieve with my nose tip, as well.

Here is a frontal view of the old system look: 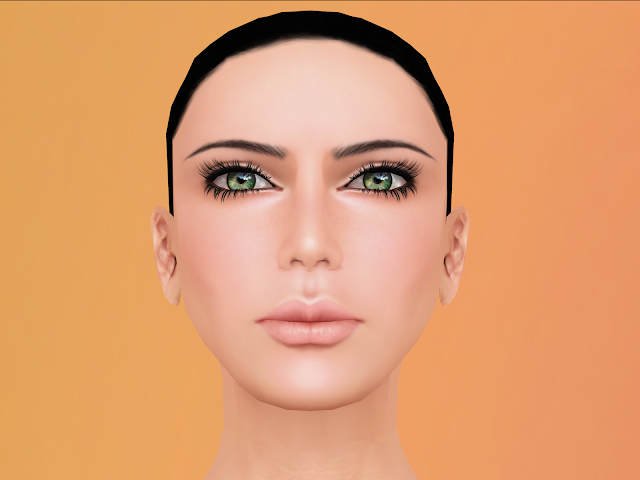 And, frontal view of the new Lelutka Cate Bento: 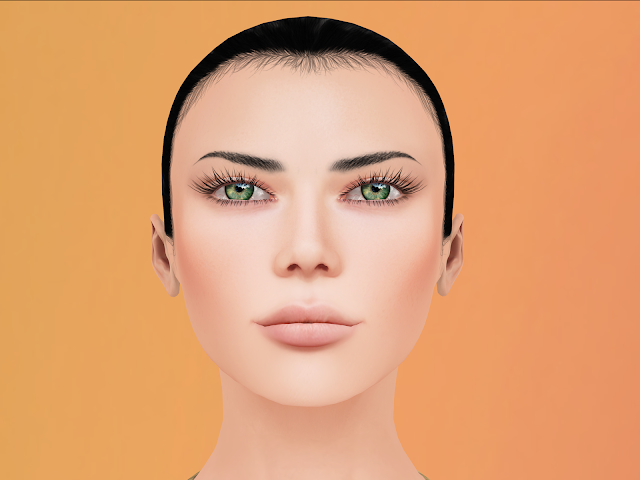 My look definitely resembles my old system look, but I particularly appreciate the less-cartoony/more realistic, more natural, more smooth human look I was able to achieve with my new Bento head.

And, here is a completed look, with hair and makeup. I am very happy with my Lelutka Cate Bento head, indeed! I can still retain my basic system look while actually looking better than the system look ever could. 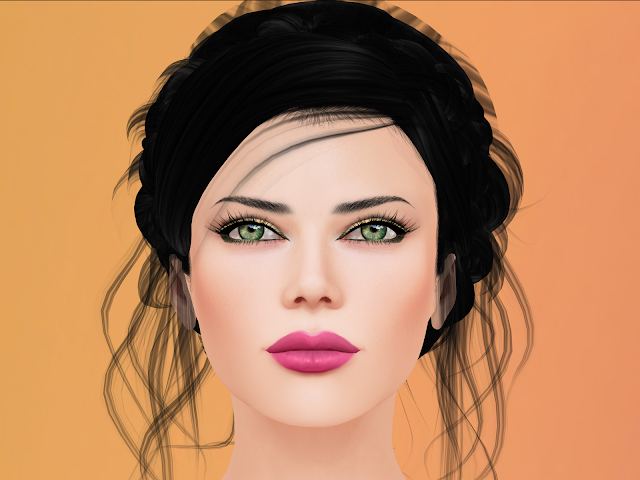 Now, I have to say here that I did not at all like the ears that came with the Cate head. They stuck out at a quite amazing angle, probably 45 degrees, I would say, giving a simian appearance to an otherwise very pleasing look. Fortunately, with the Lelutka HUD, it is possible to quickly and easily hide the ears, which I immediately did. I replaced them with mesh ears from Mandala, the Simple Hutuu ears. I had to manually set the color, which does not match perfectly, but works well enough, as you can see above.

Another thing I don't particularly like about the Lelutka head is that those items applied with Omega appliers seem to hang up when applying. Appliers made for Lelutka go on quickly and smoothly without glitches, while Omega appliers seem to require more effort to apply, and, even with the rerouter, often apply where I do not want them.

There was a very recent update to the Lelutka heads, making the current version the 2.7, which I am using here. With the current update, there are several new additions, including several teeth, braces, and eyes. I am using my usual Mayfly Luminous Mesh Eyes in Sea Green Shadow. I love the Mayfly eyes, with their many, many options, but the eyes and options in the Eyes tab on the Lelutka HUD are quite good. You can see that here: 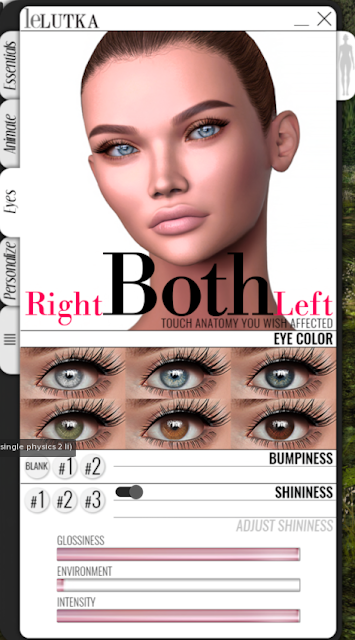 In the system photos, I am using Belleza skin Nina Pale 0 with dark brows. Belleza only had one skin for Lelutka available, and the eyebrows on that were the trendy, thick, heavy brows that I don't care for. So, I went with a Glam Affair Skin, since the Maitreya body comes with Glam Affair already installed, and the fact that Glam Affair makes some beautiful skins. I chose the Luminay skin in Europa tone to wear with my new Cate head because it is subtle and smooth. This skin comes with an eyebrowless option which allowed me to find suitable eyebrows. I finally found some thin eyebrows at Sinful Curves Skins. I purchased the Classic Eyebrows Fat Pack that includes eight classic brows colors as well as eight appliers colors.

My eyeshadow is from Slackgirl, Cassandra, and my lipstick is from Alaskametro, Heat. I absolutely adore Alaskametro because it fits my lips shape very well and does not distort into big, bulky lips once applied.

I will note here that none of my friends, and not even my boyfriend, noticed that I had changed my head, even after I drew attention to that area (without telling them I had a new head.) My boyfriend did say that he noticed something seemed different, but thought it was my makeup. So, yes, I would say that the transition was really successful!

So, there you have it, my adventures with Lelutka Cate!